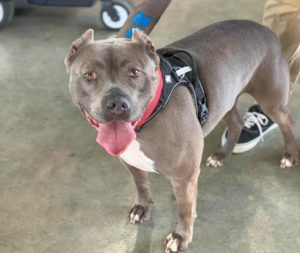 A resident of Valley Animal Center in Fresno, CA for 1,001 days (that’s almost 3 years for you math whizzes), Marmaduke has finally been happily united with his new person.  On Friday, August 2nd, 2019, the big moving-out day arrived at last for this 7 year-old shelter dog who had been awaiting adoption since 2016! But finding a forever home for this lovable American Staffordshire was a group effort to say the least.

The Valley Animal Center is a no-kill shelter with the goal of reducing euthanasia on treatable and adoptable animals through adoptions, spaying and neutering, and humane education. They rescue a lot of animals with health problems and behavioral issues other shelters consider unadaptable.

When Marmaduke first arrived at the shelter in 2016, he was without any obedience training and was a bit stubborn. He also had skin allergies that required a special diet and medication, as well as a home with pet-friendly synthetic grass. With so much maintenance required, the odds of adoption were really stacked against this poor guy. Still, the Valley Animal Center staff were determined to show the world Marmaduke’s fun-loving sweet side.

Marmaduke came to Valley Animal Center in 2016 and unfortunately has not found his perfect match. This 7 year old's perfect match would be a home with no cats, dogs, or young children. Due to his health concerns including allergies he should go to a home that can provide him with his medication, special food, and pet friendly synthetic grass. If you are interested in meeting Marmaduke the adoption center is open 7 days a week from 10AM – 4.30 PM. We recommend Landscape Connection for synthetic pet approved lawns. #marmaduke #adoptdontshop #oneinamillion

With the help of Creature Coach Animal Training and many volunteers, Marmaduke learned basic commands and obedience training that greatly increased his chances of being adopted. His trainers and caretakers came to learn pretty quickly that he was obsessed with tennis balls and he loved walking and trotting alongside people.

Now, with the training he needed and the proper medication to manage his condition, Marmaduke was all set for his furever family. Still, no one was biting on his adoption, so the passionate shelter staff took to social media to make the senior pup’s charms known.

Soon, word of Marmaduke’s plight spread with people reaching out to cover his adoption fee and the cost of transition training classes for a potential new family. Marmaduke was now a social star but still had no one to take him home.

Finally, on his 1,001st day living at Valley Animal Center, the lovable Marmaduke caught the eye of a visitor on a routine walk through the shelter. Though he continued to visit and exchange emails with the staff, it was fate that he and Marmaduke would end up together.

Sure enough, shortly after that 1,001st day the papers were signed and Marmaduke was ready to go home! Now that he’s out of the shelter and into a loving home, Marmaduke is getting spoiled with all the walks he could ever want, and he doesn’t even need to share his tennis balls anymore.

Marmaduke’s success story was so celebrated, it even made its way to Good Morning America where it got the anchors all choked up. Live on air or not, who can blame them?

We apologize for the slight glare, but our hearts are WAY too full right now to wait for the online version to debut! We are BEYOND grateful to @goodmorningamerica for sharing Marmaduke’s story with the world this morning! You have given our Valley Animal Center staff of 28, caring for approximately 400 homeless animals, a Wednesday morning boost! #valleyanimalcenter #adoptdontshop #goodmorningerica #morningmotivation #fresnoproud #nokillshelter

Marmaduke’s fairy tale ending is sure to bring a smile to your face, but what’s even better is knowing that the Valley Animal Center staff of 28 continues to care for around 400 homeless animals, ensuring even stubborn and high-maintenance animals have someone to love them. Here’s hoping that means we keep seeing more stories like this one from them!

The post 7-Year-Old Dog Pit Bull Spent Over 1,000 Days in a Shelter. Will He Find His Furever Home? appeared first on iHeartDogs.com.