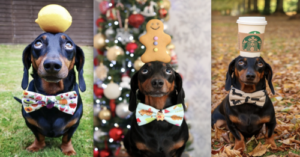 Harlso is an adorable Dachshund that has become a social media star thanks to his unusual talent. He can balance items on his head! Not just specific items, but he can balance nearly anything on his head including dog toys, donuts, and even a tower of cards! There seems to be no limit to this dog’s talent, which is what has made him a social media star. So, how did this adorable dog even learn this special skill?

The Start of an Amazing Talent

When Harlso was only two years old, his dad, Paul Lavery, thought it would be funny to set a squeaky toy on Harlso’s head. When he did so, Harlso became frozen in place, allowing the toy to balance on his head. Before that moment, Harlso’s parents had no idea of his hidden talent, so they were amazed.

Lavery and his partner, Jen Scott, said that they had tried to teach Harlso tricks many times before. He had no interest in “sit,” “lie down,” or “roll over.” However, he seemed perfectly content balancing his toy on his head.

So, Lavery and Scott decided to try balancing other items on Harlso’s head as well. From there, they learned that he seemed to be capable of balancing all kinds of strange objects.

At first, Harlso’s parents created him an Instagram mostly just for their friends and family, however, it soon became a huge hit. Harlso had 14,000 followers within 9 months. He currently is up to 110,000 followers! He even won Ireland’s Social Media Personality of the Year award.

On Harlso’s social media, his parents post different photos and videos of him balancing items while wearing a matching bowtie. He currently owns over 300 unique bowties.

Lavery says that he never allows Harlso to balance anything that could potentially be dangerous to him, so never anything too heavy. Almost every object that Harlso has balanced so far he’s gotten on his first try. Regardless of the shape of the object, he seems to have no problem letting it rest on his head. His parents guess that he has successfully balanced 99% of the objects so far. He truly is one talented dog.

“He was always really bossy and a bit of a diva so the fame hasn’t changed him because he’s always been like that!” said Lavery.

Harlso’s parents don’t think that his talents can be taught. In fact, they’re not even sure how or why he does it. Lavery even said that one day Harlso might lose interest in it and stop balancing things, but in the meantime, there are plenty of adorable photos of his amazing skills. What other odd talents could our dogs be hiding from us?

The post Instagram-Famous Dachshund Can Balance Almost Any Object On His Head appeared first on iHeartDogs.com.