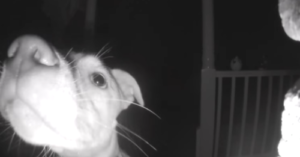 Robert and Angelina Fox went to sleep in their Georgia home after a long day. They were already dozing off when the sound of the doorbell interrupted them. Of course, many people don’t feel like getting out of bed to check the door at night, but Robert knew it was odd for someone to be at the door at 2am. So, he got up to investigate, and he was surprised to see Chika, their adorable Lab mix, on the other side.

When Robert had locked up for the night, Chika must have slipped outside without him realizing it. Not long after he locked the door, he, Angelina, and their son were already in a deep sleep. If the doorbell had not rang, poor Chika could have been outside all night!

Once Chika realized that she was locked outside, she had no idea what to do. She knew her family hadn’t meant to lock the door on her, but she didn’t know how to get their attention. So, she spent an hour or two wandering around, trying to find a way in. Then, she finally had a brilliant idea.

Deciding to Ring the Doorbell

Around 2:18am that night, Chika found a way to let her parents know where she was. A security camera out front filmed her approaching the door. First, she used her nose to ring the doorbell. She waited patiently for a second, but then a noise in the yard caught her attention, and she wandered off to go investigate.

When Chika returned not long after, she approached the doorbell again. This time, she rang the doorbell with her paw. The footage ends with her patiently waiting for someone to come to the door. What a smart dog!

After hearing the doorbell ring twice, Robert knew that something was up. He got out of bed and opened the front door. When he saw Chika sitting on the other side, he couldn’t believe it. He feels horrible for leaving her out there, but he is also so proud that his dog figured out how to get back inside.

From now on, Chika’s family will be extra careful when locking up for the night. They now know that their loyal dog will patiently wait outside for them, but they want to make sure that Chika stays safe inside at night. Luckily, Chika is a smart dog that can get herself out of a difficult situation if needed though.

The post Smart Dog Rings Doorbell After Getting Locked Out at Night appeared first on iHeartDogs.com.