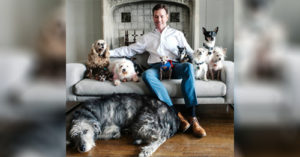 From Darkness into the Light

After a hard loss of one of his fur babies that left an emptiness he just couldn’t fill, Steve Greig had the heartwarming and inspiring idea to go to the local shelter and adopt the “least adoptable” dog they had.

“I was just so distraught about [that death]. A month or two went by and I still felt so horrible about it. I decided that the only way I would feel better was if something good happened that probably wouldn’t have happened if he had not died.”

Enter Eeyore, who, at the time, was a 12-year-old chihuahua with heart and knee problems. Eeyore’s adoption sparked a legacy for Steve who has continued adopting senior dogs and has become a voice for pups that are the most often overlooked.

When your best friend smothers you with love. #smothersbrothers Englebert ,12 yrs old and his best friend Eeyore, 18 yrs old.

The Wolfgang, as Steve affectionately calls his clan, doesn’t stop with dogs. He has a potbelly pig named Bikini, a chicken named Betty and throw in some rabbits, because why not? As you can imagine, there is snuggle time 24/7 and plenty of shenanigans!

Hope everyone has a happy Easter.

It’s not easy though. Steve gets up before the sun every morning to make the whole gang breakfast, which is no easy feat. This is a particularly daunting task because many of them require special diets and assistance eating.

Take Englebert for example. A tiny and feisty little guy with no lower jaw. Steve served him soft food and often formed it into small food “mountains” in order to help Englebert eat. Have a quick peek at Steve’s Instagram and you’ll quickly realize that he and Englebert shared an unbreakable bond. Steve recently shared the gut-wrenching loss of his dear friend Englebert.

Englebert, dressed for spring. #optimist Those are little fruits on his shirt. I might have had a glass of whiskey when I bought this. (Because I know you're going to ask, I bought it on Amazon, search dog shirts after you've had a glass of whiskey.) (Yes I saw the hangnail. It's been clipped.) Yes, I know all the pictures have been about Englebert lately. He likes to pose more than the others so sometimes it just works out that way. Okay…I'm ready for the comments…..😁.

“That afternoon as we were leaving the vet, after more tests and new plans, in my arms, in the parking lot, when it was just the two of us, he said goodbye, and then he was gone.”

Steve will stop at nothing for his babies. He admits he isn’t the most mechanically inclined. However, his lack of mechanical knowledge didn’t stop him from assembling a wheelchair for Doris. Doris is a spunky and sassy little girl who came to him with heart problems and kidney disease. The fearless leader of this pack, Steve, made the wheelchair complete with pink and purple accents just to her liking. Steve admits Doris can be a little bashful when it comes to pictures. Because of this, she often pretends to sleep when the camera comes out. Luckily, she was so excited to show off her new wheels so she gladly struck a pose!

When I was in high school I took some apptitude test that said I should stay away from any occupation that required mechanical skills. My mother, fully aware of my limited abilities in that area, got a big kick out of those test results and put them up on our refrigerator, I assume to remind her never to let me work on the family car. So, knowing that, I'll just let you guess how long it took me to put this wheelchair together and whether I might have used language not entirely suitable for a children's author. Doris has very weak back legs so I'm hoping this will give her a little bit more mobility around the house. But she's really kind of a miracle. She came to me with a bad heart and then she developed kidney disease, two things that are very hard to treat at the same time. About four months ago her test results were so bad our vet wasn't sure she'd make it through the week. But here she is, doing great and handing whatever life throws at her, including a poorly assembled wheelchair. #goodattitudepoorapptitude

“About four months ago her test results were so bad our vet wasn’t sure she’d make it through the week. But here she is, doing great and handling whatever life throws at her, including a poorly assembled wheelchair.”

The More the Merrier

Just like Doris, it doesn’t appear Steve plans on slowing down anytime soon. He recently expanded his family and welcomed John Henry, a rescue from True & Faithful Pet Rescue Mission in Venice, Florida. The pair were united at the airport and shared an instant connection. John Henry made himself at home and quickly became one of the best-dressed babies in the bunch!

Explaining John Henry's name: When I was in 4th grade a new kid transferred to my elementary school named Ronnie. His family had a lot of money but that kind of thing doesn't set up barriers when you're only 10. We found out we had the same sense of humor and we quickly bonded. I wanted to call him after school to see about getting together that afternoon. My exact words were, "Hey do you have a phone?" His exact response was, "We have several." I thought it was an odd response for a 10 year old kid but I called him anyway and we became best friends for the next 40 plus years. At that time he had a little white pomeranian dog named John Henry. I always thought that was such a cool, strong name for a little, spunky dog. My friend Ronnie passed away from cancer almost 2 years ago and naming this rescue after his childhood dog felt like a nice way to think about him again, and at the same time honor Englebert, who will never truly leave my side. Englebert's name by the way, before I adopted him was Henry. It just all seems to fit. #whatsinaname Enoch and John Henry

New Life, Who This?

He chose the name John Henry in memory of his best friend of 40 years who recently lost his battle with cancer. As if it was meant to be, Steve’s beloved Engelbert was also named Henry before Steve adopted him. The name John Henry seemed like an obvious choice, perhaps as if Englebert himself had sent John Henry to join the family.

“I almost always rename the pets I adopt. I read somewhere that a pet associates their name with the person calling it, not with themselves… I don’t know if that’s true or not but I like the idea of having a new name to go along with their new life,” Steve said.

When Steve and the Wolfgang aren’t busy cuddling or posing for cute pictures, Steve works as an accountant. Also, he and the gang promote several dog rescues including Maxfund Rescue and Susie’s Senior Dogs.

So I heard its national pet day, or national sibling day, or national pet sibling with a pig day. It's so hard to keep up. Anyway, here's the latest group shot I have of everyone, taken by my friend @melissamarkle and it should cover whatever national day it really is. (It also happens to be the cover shot of the Wolfgang kids book coming out later this year, link in bio.) #covertlydisguisedbookplug From left to right, top to bottom: Edna, Eeyore, Doris. Edsel, Loretta, Betty the chicken, Englebert, Melvin, Stuart the rabbit, Waylon, Bikini the pig and Enoch.

In addition to posing for pictures for their 821,000 Instragram followers, the family has also been working on their new book, The One and Only Wolfgang.

The post After Losing His Dog Man Goes To Shelter, Adopting All The Dogs Nobody Wanted appeared first on iHeartDogs.com.