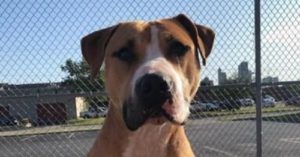 iHeartDogs works closely with The Greater Good by donating part of each sale to their various charity efforts. One of the charities, Rescue Bank, works to donate quality dog food to shelters and rescues who are in need. Some organizations could not run without the kind donations from organizations like this, and that’s why your donations are so appreciated.

The Dogworks Rescue is just one of the many rescues that benefit from the efforts of the Greater Good Rescue Bank. Thanks to your kind donations, they were able to welcome August, the happy go lucky pup that had spent half of his life in the shelter.

August is a vivacious pup that was surrendered to his local shelter when he was just one year old. After soon spending 300 days within the walls of the Ohio shelter, his time was running out.

August stole the hearts of the staff at the shelter with his cheerful personality and his enthusiastic take on life. Even with being adopted and returned several times, his wonderful demeanor remained intact. Volunteers and other dog lovers that met August could never understand why it was so challenging to find him a forever home, as he was such a joy in many ways.

August played well with other dogs his size, thoroughly loved car rides, and was described as a gentle giant. Aside from his wonderful temperament is the fact that he’s downright handsome as well. With his long list of lovable qualities, it’s no wonder the shelter staff and volunteers were heartbroken once they found his name on the euthanasia list.

With being one of the long-time residents at the shelter, they just couldn’t avoid this awful situation once it came time to “make some room” for other dogs in need. August’s supporters begged and pleaded with shelter workers to look for a rescue that could find a foster home for this deserving pup. After exploring every option possible, they finally found a rescue that was willing to give August a chance.

Dogworks in Toledo, Ohio is a rescue organization that helps to rescue, rehabilitate, and re-home abandoned and unwanted dogs. With a team of incredible volunteers that help to advocate for dogs in need, they knew they could find someone who was up for the task of bringing August into their home.

Once they found a potential foster, it was time to introduce August to the other dog in the foster’s home. Luckily for August, the two ended up hitting it off! Not only did he find an incredible foster home, but he also gained a furry best friend.

With how well August fit in with his new foster family, it became clear that this is where he was always meant to be. August became a foster failure and was soon adopted by his incredible foster family! August had finally found his forever home.

“Thanks to GreaterGood.org’s Rescue Bank program supplying August’s food while he was fostered, it allowed for a trainer to consult with the family in order to make sure they were on the right path of acclimating August to living in a home since he had been in the shelter for so long. Rescues could not do what they do without the support of partners like GreaterGood.org and their supporters! We thank you!”-Dogworks

We are so happy that everything worked out for sweet August and are so thankful for the dog lovers who fought for his happy ending!

The post August Spent Half His Life At The Shelter & Now He’s In A Loving Home Because Of You appeared first on iHeartDogs.com.