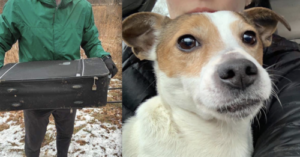 Two joggers came across an unusual object when they were on a trail at Etobicoke Park in Toronto, Canada. They saw a suitcase on a less busy area of the trail, and approached it curiously. As they got closer, the suitcase began to move and they could hear an animal inside. At first, they thought there was a wild animal trapped in it, but when they unzipped the suitcase slightly, a small dog’s nose popped out!

Toronto Animal Services came to the rescue as soon as possible. Based on some footprints, it seemed like after the dog had been zipped inside the suitcase, she had been thrown down a hill. The horrible person responsible had just left her that way. Animal services had no idea who had done this to the poor little dog, but now she was in good hands.

Animal services decided to name the dog Casey. She appears to be a Jack Russell Terrier mix, and she is between 5 and 7 years old. She also looks like she had given birth to a litter of puppies at some point, but she didn’t have a collar or microchip.

Black Dog Rescue has been posting updates about Casey on their Facebook page. So far, she seems to be perfectly healthy after all she went through. She didn’t show any signs of neglect or abuse. However, if the weather had been any colder outside or if she hadn’t been found right away, she would have froze to death.

Casey needs to be held at Toronto Animal Services for at least 5 business days. Once she’s ready, she will be available for adoption. Luckily, it seems like she’ll have no problem finding a forever family.

“There is lots of interest in her so she won’t have a hard time finding a new home and getting a second chance. She did come to the right place,” said Wendy Burant with Toronto Animal Services.

Casey is a very timid pup at first, but she has warmed up to the staff since she arrived. She’s very food-motivated, so she’s extra friendly when treats are involved. Overall, she’s a happy dog that hides her heartbreaking past well.

Even though Casey is happy and healthy, there are still a lot of unanswered questions. They still have no idea who did this to her, but the police are currently investigating the situation.

They are looking into this event very closely, but they don’t have a lot to go off of at the moment. If the person responsible is found, they could face a fine of at least $130,000 and possible jail time. So, if you know anything about this situation, please contact Toronto Crime Stoppers.

If you are unable to care for your dog, that’s not an excuse to abandon them inside a cold suitcase. Animal rescues always want what’s best for dogs, so they are there to take in dogs in need. Hopefully more people will use animal services as a resource instead of abandoning their dog like Casey. Anyone who abandons a dog in this way should be punished for their actions.