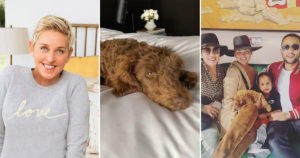 Ellen Degeneres recently took to Instagram to make a plea to dog lovers everywhere. A litter of puppies and both of the parents were in desperate need of funds for their care and finding families of their own. So far, celebs like Chrissy Teigen and Kris Jenner have adopted puppies from the litter, but more are still available.

Ellen announced on her show that she had some very exciting news to share. She and wife Portia had rescued a puppy from Wagmor, a rescue group. Wally (for short) brings the couple’s dog count to four. They already have three other dogs, Wolf, Augie, and Kid. The adoption took place a few months back and by all accounts, Wally is settling in nicely with the family. When Ellen was made aware that the group had taken in an entire family of Standard Poodles, she did what she does best. She used her platform to help out!

Wagmor reported to People that the exposure from the Ellen show led to the family of puppies and their parents being surrendered to the rescue. A Wagmore representative told People,

“Since the Ellen show exposure, we’ve gotten more surrenders than ever before. A week and a half ago, people in need got in touch with me looking for help. They were getting evicted from their place and had a family of standard poodles: two, two-year olds (male and female) along with eight, ten week old puppies that needed a home as soon as possible,” the representative said. “All of the dogs came into my care the very next day. The dogs were filthy but all of them had a clean bill of health.”

These babes got their shots yesterday. They all got a clean bill of health. In a few days they will be able to visit with potential adopters! Please don’t call or visit yet. The front desk has no info! We will keep everyone posted here!! @theellenshow #poodlesofinstagram #myrescue

This week Ellen re-posted a photo of what she called Wally’s family. A litter of puppies and the mom and dad dog were pictured with a message from the rescue group, Wagmor. It said:

“Dire situation. 10 dogs need help now! 8 puppies plus mom and dad. None have any vetting. We need to raise $$ to cover costs. Please if you can send even $5 it will help! Venmo is wagmorpets dogs and puppies will be available soon. But right now we need to make sure they are safe and healthy.”

@ChrissyTeigen, just when I thought I couldn’t love you more, you go and do this. #repost @chrissyteigen ・・・ welcome to the family, petey! thank you @theellenshow and @wagmorpets for making us aware of this adorable little rescue family. this little guy grabbed our heart first and will hold onto it forever!

It didn’t take long for word to reach members of Ellen’s celebrity circle. First Chrissy Teigen and John Legend opened their homes and hearts, adopting one of the puppies. They named him Petey and told their Instagram followers, “this little guy grabbed our heart first and will hold onto it forever!”

The next celeb to spring into action was Kris Jenner. Earlier this week she brought home a female from the litter and named her Bridgette. She shared the good news on Instagram as did the rescue group, Wagmor. Both posts have since been removed after backlash from commenters on social media.

As they say, no good deed goes unpunished. This is especially true for celebrities. Commenters on the Wagmor post expressed their displeasure that celebrities appeared to be given priority treatment in adopting the puppies from the litter. “So are these dogs only going to be available for celebrities?” one user commented on Wagmor’s deleted post about Bridgette’s adoption. “Seems as if only the rich and famous get the A Class dogs,” another commenter wrote on a photo of Petey.

Of course, there is no public evidence pointing to preferential treatment. Two puppies have been adopted and yes, they were adopted by famous people. By our count, that means there are still 6 puppies available and 2 adult dogs that are ready to go home! And, for the record, we believe ALL dogs are A Class, not just pure breeds.

If you are interested in bringing any of the available puppies or the adult parent dogs home, contact the Wagmor Luxury Pet Hotel & Spa.

The post Celebrities Answer Ellen DeGeneres’ Call To Adopt – But Not Everyone Is Happy About It appeared first on iHeartDogs.com.