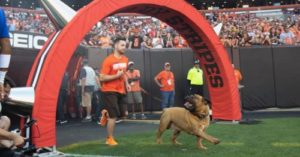 Swagger was born July 20, 2013. His family, the McLaughlins, served as his handlers and ran alongside him through the tunnel at games. That, among other things, was one of his major duties.

“On top of regular appearances on Dawg Pound Drive and events throughout the community, Swagger ran through the tunnel at every Browns game at FirstEnergy Stadium from 2014 to the midpoint of the 2019 season.”

The little guy kept himself very busy as a mascot. Throughout his mascot career, Swagger only missed one single “home” game in 2017 (because it was technically abroad in London). He committed to his team!

“Swagger unfortunately has passed away completely unexpected this afternoon. Alot of people did not know Swagger had been dealing with cancer for the past year. Today he had a stroke and it took his life.. We will always remember him as the most loving dog we have ever encountered. His love was felt by thousands of people literally all over the world!!!”

Swagger’s son, SJ, later took over for his dad in Week 10 of the 2019 season. SJ will continue to assume the mascot role from now on. He’s got some big paws to fill but seems up to the task.

Players and Browns fans also shared their sorrow over Swagger’s loss this week. Browns quarterback Baker Mayfield shared photos of himself and Swagger with a sad goodbye.

“We love you and we’ll miss you. Doggy heaven got a good one today.”

The team tweeted well-wishes from their official account too.

“We’re heartbroken by the passing of our beloved mascot, Swagger. As a constant presence on gameday and the leader of the Dawg Pound, Swagger was a proud member of our team for 6 seasons. RIP.”

Though the pup’s life was cut too short, few dogs achieve the level of fame this guy did. Rest in peace Swagger! Your role is in the capable hands of your son now, but you’ll be missed.

The post Cleveland Browns Doggie Mascot Dies At 6 After Battle With Cancer appeared first on iHeartDogs.com.