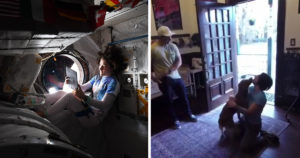 Do you ever wonder where our dogs think we go when we leave the house? Maybe they believe we’ve just disappeared off the face off the planet when we’re out of sight, and we’re never coming back. Well, for one dog spacey pup, that would be at least half right.

Astronaut Christina Koch has just made history as the woman who has spent the most consecutive days in space. She launched aboard the Soyuz MS-12 on March 14, 2019, and returned home earlier this month after a 328-day space flight. 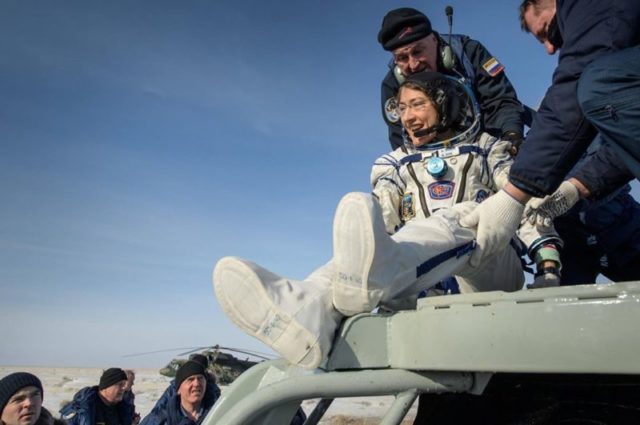 She spent some time aboard the International Space Station, and in October participated in the first-ever all-female spacewalk with fellow astronaut, Jessica Meir. Koch’s excursion was only 12 days shy of the longest space flight by anyone and shattered the previous female record by 40 days.

Koch is being praised for her accomplishments, but no one is a bigger fan than her dog, Sadie Lou.

Sadie Lou, also known as LBD for “Little Brown Dog”, was here on Earth, waiting for Koch to return home from her trip. She probably doesn’t know where her human has been, or what she has done, but Sadie Lou welcomed her home with all the enthusiasm in the world!

In a press conference at the Johnson Space Center, Koch talked a little about Sadie Lou and answered a call-in question from a fellow dog lover hoping to learn more about her.

“The first thing that I did after I went home was to reunite with my dog, which was wonderful. She was very excited.”

“We call her ‘LBD,’ ‘Little Brown Dog.’ She’s from the Humane Society and she couldn’t be sweeter. And yes, she was very excited. I was very excited – I’m not sure who was more excited to see the other.

“You know, it’s just a symbol of coming back to the people and places that you love. To see your favorite animal.”

See their reunion below:

Not sure who was more excited. Glad she remembers me after a year! That’s Sadie Lou, our LBD (little brown dog). Best breed for a best friend.