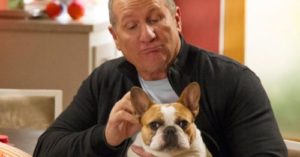 I’ve always been a huge fan of the writers who put dogs into their movies and TV shows. Well, provided they’re not just props in a horror movie (you know what I mean.) ABC’s Modern Family featured a French Bulldog named Stella, but just like anyone else on the show that dog was just an actor named Beatrice.

A skilled animal actor, Beatrice booked tons of gigs. Some of her other appearances include roles on Crazy Ex-Girlfriend, Workaholics, and ads for Dunkin’ Donuts. Xbox, and Chase bank. Good Dog Animals “represents” Beatrice, along with many other hard-working animal actors (mainly rescues.)

Sadly, even famous actors are not immortal. 10-year-old Beatrice still appears in the series’ final episode. Shortly after filming wrapped, she passed away. She played the Pritchett family’s dog from the show’s 4th season up through the end.

Good Dog Animals took to twitter to express their sorrow at Beatrice’s passing.

“With deepest regrets that we have to inform you all that we lost our beloved Beatrice. Our hearts are broken and we are devastated. It was way to soon, but we are happy in knowing how many lives she affected. She will always be our brightest star!”

A Pleasure To Work With

According to her real parents Guin and Steve Solomon, one of the show’s human stars, Ed O’Neil, absolutely adored having Stella on set. His character Jay dotes on the dog excessively, and that’s true in real life too. The Solomons described their special relationship in an interview:

“Ed O’Neill is in love with her! It’s very easy working with him because he brings Beatrice treats like popcorn and always looks out for her – like we’ll be doing scenes in the backyard by the pool and in between takes he’ll say, ‘Would you please get Beatrice an umbrella, she’s in the sun!’”

Stella’s energy and playful attitude thrilled everyone on the Modern Family set.

“Of course the crew loves to play with her when she’s out and about because she’s so fun and clowny. She really is one of the family!”

Jesse Tyler Ferguson, who plays Mitchell on the show, also shared a sweet farewell to his late co-star on Twitter.

“Rest in peace sweet Beatrice. We love you so much.”

Beatrice: you were a true talent and your legacy lives on with binge-watchers everywhere. Rest in peace sweet girl!

The post Dog Who Plays Stella On Modern Family Has Passed Away appeared first on iHeartDogs.com.