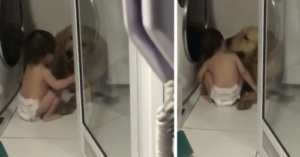 Unfamiliar things are usually very scary for dogs, especially when it comes to loud sounds. Thunderstorms are a common fear for dogs because to them, booming noises coming from the sky are just not okay!

During a thunderstorm, most dogs find a place to hide, trying to find the safest place possible. However, sometimes all they need to calm their fears is some love. One smart toddler knows exactly how to comfort his best friend during a storm, and their bond soon became viral.

For many dogs, thunderstorms cause panic or anxiety, which is difficult to deal with alone. So, when a toddler saw his Golden Retriever friend cowering during a thunderstorm, he knew he had to help. While most adults might not have rushed to the rescue, this sweet toddler knew it was the right thing to do.

Someone in the house spotted the toddler comforting the scared pup and quickly caught it on camera. They filmed it for about a minute. However, it’s so adorable that we all wish the video could be longer.

The dog appears to be cowering beside the washer and dryer, but the toddler is right there with him. Throughout the entire video, the toddler sits right beside the dog. He gently pets the dog to help him relax. It actually seems to help the pup calm down a bit. The toddler seems to be mumbling encouraging things too, but it just sounds like gibberish to everyone else.

“This little guy comforting his buddy during a thunderstorm is the best thing you’ll see today,” wrote @akkitwtsi, the Twitter user that posted the video.

Now, this heartwarming video has gone viral! It has been shared over and over again, and people just can’t stop saying ‘aww!’ This video pointed out that kids and dogs truly are the sweetest beings on this planet. The dog likely comforts the toddler on a regular basis, so the little kid was just returning the favor.

How the World Responded

Luckily, the comments section was just as positive and heartwarming as the video itself:

“So glad I saw this.  Helps cheer me up after all the fear and uncertainty in this world right now,” commented Twitter user @redbeard_1960.

“Sometimes we adults need lessons from the children,” commented @blu_audrey23.

Most people think that heroes wear capes. However, this video proved that true heroes wear diapers. Hopefully, this child will only become kinder and more loving as he grows up. After all, his viral video has helped remind us that dogs need comfort, especially during moments that are scary and unfamiliar to them.