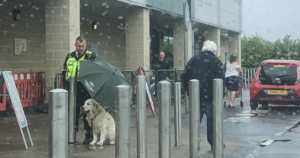 Even the little things in life can have a huge impact on others. After all, one kind gesture can go a long way. When a security guard extended his kindness to a dog he just met, he never expected he would become a hero. He just wanted to do the right thing.

Ethan Dearman is a security guard at Morrisons. On a particularly rainy day, he saw a dog sitting alone in the rain, and he didn’t have to think twice. He knew that dog would want someone to keep him dry.

Dearman approached the dog, who appeared to be a Golden Retriever. The pup looked like he was tied to a pole outside while his parent ran inside. It might not have been the safest option for the poor dog, but at least he wasn’t trapped in a hot car. However, the dog didn’t seem too pleased about the rain.

Without hesitation, Dearman offered his own umbrella to the dog. He held it over the pup’s head to keep him safe and dry. He felt that the dog needed shelter much more than he did, so he was willing to sacrifice his own comfort to help a dog in need. The best part of the photo is that the dog looks happy and grateful for Dearman’s kindness.

“Well you never know how dogs feel about the rain,” said Dearman.

An Act of Kindness Goes Viral

One shopper caught an adorable photo of Dearman’s interaction with the dog. She shared it on Twitter, where it immediately gained popularity. After only a day, the post already had over 96,000 likes and 12,000 shares! Even Dearman shared the post, saying how grateful he was that he made others happy.

“Looks like I made a lot of people happy today,” wrote Dearman.

Soon, everyone was calling Dearman a hero and demanding he get a raise. Morrisons replied to some of the comments, so maybe this kind security guard will soon get even more recognition. After all, not every security guard would go above and beyond for a dog in need.

As it turns out, Dearman has always been a huge dog lover. He has a small dog of his own named Sanchez, who is currently recovering from a leg injury. He posted an update on Twitter to share that his sweet pup is slowly healing. He’s just making sure the pup has plenty of time to relax in the meantime.

It’s true that not all heroes wear capes. In fact, some heroes wear high visibility jackets. Plus, Dearman proved that being kind to animals is the best way to become a role model. The other security guards could learn a thing or two from him.