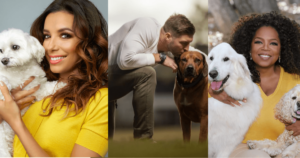 Despite the ample evidence to back it up, there are still naysayers out there who insist that losing a dog can’t compare to losing a person. In reality, experts say losing a dog can sometimes be harder than losing a person. This type of grief process is less socially respected, and dogs dictate much of our routines which end up hugely disrupted when they’re gone.

Fortunately, some people out there with large platforms are using them to banish any doubt that losing a dog really hurts. Here’s a list of notable celebrities who have spoken out about the immense pain of losing a dog.

This past summer, Orlando Bloom’s dog Mighty went missing. After seven days of constant searching, only the Miniature Poodle’s collar was located. Bloom updated his fans on Instagram with the devastating news that Mighty was presumed dead.

“I have wept more this week than I thought possible. I feel so grateful to have learned from my little Mighty man that love is eternal and the true meaning of devotion. He was more than a companion. It was a soul connection for sure.”

The actor emphasized the importance of accepting this intense grief over losing a dog.

“Trust it and don’t be afraid of love or the fear of losing love. Love is eternal. The bond between Mighty and I shows devotion in ways I have not truly understood until now. I am a devoted father & partner, still, there is a reason why they call them ‘man’s best friend.’”

Longoria lost her 15-year-old dog Jinx shortly before the birth of her child. The Desperate Housewives star shared how sad she was to lose her first baby, her dog.

“He was my baby before this baby in my belly came along. I’m so sad but know that he’s out of his suffering. Anyone who knew me, knew Jinxy.”

Hardy rescued a terrified stray while filming Lawless in Atlanta, Georgia. Sadly, Woody tragically died at only 6 years old after losing a battle with polymyostisis.

The actor wrote in a passionate obituary on Tumblr:

“He was an Angel. And he was my best friend. We went through so much together. Charlotte worked tirelessly with him to get him through a rough case of separation anxiety. He loved her like his Mum. And when she was pregnant he gaurded her fiercely.”

Hardy knows fate brought Woody into his life, and he’s grateful for that.

“He burnt very very bright and, those that burn very bright sometimes burn half as long. Thank you Woody for choosing to find us. We will love you and be with you and you with us forever.”

The former Dancing With The Stars cast member recently lost her two Cavalier King Charles Spaniels Lexie and Harley. She opened up to her Instagram followers about how deeply their loss affected her.

“Pure love is real, it existed through us. My heart expanded and felt the truth of what is possible. I am forever grateful. Thank you for your love. Thank you for being my babies, my daughters.”

The former NFL quarterback said goodbye to his Rhodesian Ridgeback Bronco in November 2019. He shared an emotional tribute to the late Bronco on Instagram.

“One of the toughest goodbyes. Wanted to make a special tribute to the sweetest boy ever – thank you for all the joy you brought and all the memories.”

The “Royals” singer recently delayed her album release after losing her dog. She explained in a letter to her fans that she just couldn’t create while she grieved his loss.

“The bright energy I was trying to communicate to you has gone, for now. He was instrumental to the discovery that was taking place. I felt he led me towards the ideas.”

Oprah famously loves dogs and lives among several. A few years ago, her pup Gracie died tragically after choking on a ball while with a dog walker. The talk show host wrote a long, eloquent tribute to her late dog.

“Not until I knew there’d be no response did I realize how much pleasure I had taken in calling for her. So I called and cried. Called and cried. “Graaaacie!” Tears of sadness for the shocking loss. Tears of joy for the pure happiness she’d given me for nearly two years. I have never seen a being, human or animal, always so full of joy. This dog lived every moment as though it were her last.”

She described her immense emotional pain, but she also knows that Gracie taught her so much in life.

“Her life was a gift to me. Her death, a greater one.”

When Brown’s Mastiff Dolly passed away, she shared with her fans how devastating the loss was. Dolly had been with her family since 2011, when the Stranger Things star was just 7 years old. She wrote on Instagram:

“Your cuddles always felt better than the ones before and your loyalty to our family was incomparable. My heart has broken today. You were the heart and soul of this family and if anyone met Dolly, you know how special she truly was.”

High School Musical star Tisdale lost her Maltipoo Maui in June of 2019. The loss completely devastated her, and she openly shared her grief with fans.

“I don’t even know how to say this. This pain is the worst pain I’ve ever felt. Maui was my soulmate, the connection was unlike any other.”

The actress also acknowledged that though getting through the day without Maui became extremely difficult, she wanted to push through for the late pup.

“Back to work today and although I’m dying inside Maui would want me to keep going. In these moments she’s giving me the strength to push through. It’s hard, every single second of every hour but I want to make her proud.”

Somerhalder loves animals, which is clear from the Ian Somerhalder Foundation which supports animal and environmental causes. The Lost and Vampire Diaries actor also rescues pups. When he lost his German Shepherd in 2018, he expressed his gratitude for her impact on his life.

“I’ve never known a more incredible animal. A soul that spoke 1,000 languages. Kid, I will miss you and anyone that ever got to know you will miss you.”

So while grieving people and grieving pets affects everyone differently, know you’re never alone in feeling extra sad over losing your dog.

The post 10 Celebs Who’ve Spoken Out About The Heartbreak Of Losing A Dog appeared first on iHeartDogs.com.