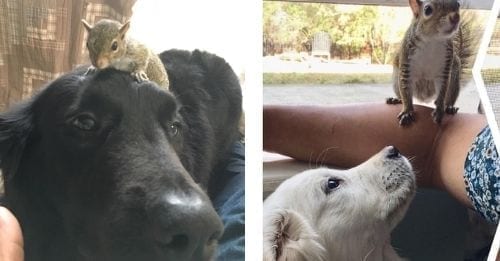 A Floridian family welcomed an unlikely furry friend into their pack just a few years ago. Though their fur dad never imagined this life for him and his pups, a squirrel friend named Zach came along and made their family complete!

A tiny squirrel was found all alone after Hurricane Irma blew him out of a tree. With his eyes still shut and barely any fur, he was likely only a few weeks old. Thankfully for this tiny friend, a man with squirrel rescue experience came along and saved the day.

The orphaned squirrel was quickly scooped up and brought into the care of the experienced squirrel caretaker. After lovingly being named Zach, he soon settled in with the unlikely siblings that would become his best friends.

The man caring for Zach had two adult Labrador Retrievers named Maddox and Maddison. Being the inquisitive and caring pups that they were, they were by Zach’s side from the start.

Maddox and Maddison attended every single feeding session from the moment Zach entered their home. They smothered Zach in kisses each chance they had and provided the comfort that Zach likely missed due to being an orphan.

Maddox and Maddison were so present in Zach’s care, that they were the first thing Zach saw when he opened his eyes for the first time. As each day passed, he bonded more and more with his canine brother and sister. Zach was so connected with his Labrador family that he likely thought he was a dog himself!

As Zach grew and became mobile, the bond with his canine siblings only grew. The loving Labs let him rest on their heads, burrow into their fur, and even nap alongside them each day. Though Zach went through a cuddly stage where he always wanted to be in the presence of Maddox and Maddison, he soon began to branch out and find his independence.

As Zach began to explore his home, he soon became too fast for his Labrador siblings to keep up with. Zach could zoom around a room in a flash, often leaving his canine friends in the dust. Thankfully for Zach, a new puppy brother named Major came into his life.

The fur dad of the house welcomed another Labrador puppy named Major into their family. Only a couple of months old and filled with energy, Zach finally found a friend that could match his need for speed.

From the start, Major was very interested in everything Zach did. Major would follow Zach around the house with each step he took, quickly deeming Major his partner in crime.

Zach and Major would scurry around the house together, gaze out the window together, and team up in annoying their older siblings. Though Zach can jump a bit higher than Major when he climbs into the curtains, Major is always right under him looking up at his best friend.

While Major loves every second of playtime with his best squirrel friend, his favorite time of the day is snack time. Since Zach will often munch on his snack and throw it down whenever he is finished, Major is always right there waiting for his leftovers.

Though Zach spends most of his time goofing off with Major, he never forgets to tell Maddox and Maddison how grateful he is for their love. It’s as if he knows they helped to care for him, and that Major is more of a playful best friend.

Whether Major and Zach are zooming around the house or enjoying a cuddle session with Maddox and Maddison, they are one cohesive unit and love each other dearly. They may be an unlikely group of friends, but they are a family.

Since Zach has been exposed to dogs from such a young age, Zach’s dad knows that he cannot be released into the wild. In an effort to cater to his squirrel needs, his dad has set up multiple outdoor areas for Zach to soak up the sun and participate in squirrel activities safely.

The post Baby Squirrel Cuddles With The Dogs Who Saved Him appeared first on iHeartDogs.com.