This is Tesla- AKA “Tess the mess”. She doesn’t like us to leave her, even though she stayed with her grandparents. That earring was $60. To get it again was $240. My husband now says those earrings are worth $300.

The post Spot the Mickey Ears appeared first on Dogshaming.

Zani’s tail is up, and you’ll see in the video below that it is wagging. Does she look friendly and happy?

Why do dogs wag their tails? The prevailing view is that they do so when they feel happy and friendly. Many do, but dogs also wag their tails in other situations. So the answer to the title question is no. Dogs wagging their tails are not always expressing friendliness or joy. Not by a long shot.

Many dogs will wag their tails from arousal or when performing predatory behaviors. Some will wag when they are getting ready to aggress. My dog Clara has a particular wag when she is anxious. When observing a dog wagging its tail, we need to look at the rest of the body language to determine what’s going on. Some things to look at are:

An important factor is the carriage of the tail. How high is the tail? (See section below on breed differences.) Other important factors are whether the tail is wagging fast or slow and whether it is stiff or loose. These things can mean the difference between an eager greeting and an oncoming attack. We can never assume that a wagging tail means a dog is friendly.

The Direction of the Wag

There is scientific research that has found a correlation between the direction of a dog’s tail wag with its emotional state. It was found that the tail wagged predominantly to the right when the dog was responding to something it might want to approach, such as its owner. The tail wagged more to the left in response to something the dog would want to avoid. When you look at the video below, can you identify a sidedness to Zani’s tail wagging? Does it correlate with what we find at the end?

This research verifies what we can already see: dogs don’t wag their tails only to express happiness. They also wag their tails during general arousal, aggression, and other emotional states.

I haven’t found any research on the height of the tail when wagging, but experienced dog trainers learn to pay attention to that. In general terms, low and loose wags are usually friendlier than wags with the tail held high and stiff.

I think it’s hard to do research about that, though, because of big differences in “normal” tail carriage between breeds, not to mention between individual dogs.

Many northern breeds, like this Shiba Inu, have a naturally high tail carriage. Their tails are built that way.

Rounder is feeling good but his tail is hanging straight down

On the other hand, some hound breeds have naturally low hanging or even tucked tails. Rounder the Rhodesian Ridgeback is in a good mood in this photo, but his tail is hanging straight down. You can find extreme examples of this in whippets and greyhounds, who often tuck their tails between their legs when standing. This tail carriage could mean “I am miserable or afraid” in many other dogs. For the whippet, it’s often just business as usual.

Summer is expressing predatory aggression in her stance, the set of her mouth, and the curl of her tail

My mixed breed dog Summer probably had some northern breeds in the mix. She held her tail at different heights depending on her mood and activities. She wasn’t all that waggy, but she had a beautiful, low, wide wag when she saw someone she loved. When her tail was tightly curled up over her back it always meant she was aroused, often predatory. In this photo, she was watching a cat on the other side of our fence.

Note the stiffness of her body, the slight lean forward, the set of her mouth, and the piloerection (hackling) around her shoulders.

Why Is This Dog Wagging Her Tail?

The video shows my dog Zani in my friend’s yard. The video shows a few seconds of her behavior. Her tail is wagging the whole time. It first plays with the sound off, so you can concentrate on her body language. Then it plays again with sound. Then finally you see the reason for her behavior. Is she wagging because she is friendly?

Link to the movie for email subscribers.

Watch the way Zani moves. Is she moving toward something, away from something, or both? Is she eagerly approaching something? Is she looking at something, listening to something? Look at the fur down the center of her back. Look at the set of her mouth.

You’ll have to watch the movie to see what Zani was responding to, and hear my own final conclusion of what was going on for her. One thing I haven’t mentioned yet: the whole sequence is adorable. Enjoy!

Hey guys! Many have already shot a video about what their dog does when they fake death in front of their dog. Today during the shooting of the video we were …

Do you own a Yorkshire terrier? If you do then congratulations should come your way because Yorkies are one of the most beautiful dogs to keep as pets. They are the most popular toy dog breeds.

Their elegant looks and devotion to their owners are just some of the qualities that have won Yorkies many fans. However, taking care of your Yorkie requires you to groom his coat meticulously.

A dog brush is the most important tool when it comes to grooming your Yorkie. You should always ensure that you choose the best brush for Yorkie, one that is capable of handling his long silky coat.

What Yorkie Grooming Tools Do You Need?

The Yorkie can be considered as one of the most glamorous dogs in the world. Its long silky coat assures him of attention wherever he goes. Yorkie puppies are born black while adults have blue and tan coats.

If you own a long-haired Yorkshire, then you will agree with us that grooming him is not for the faint heart. However, if you have the right brush, then grooming will be made easier.

Yorkies are prone to mats and tangles since they are long haired. To prevent your Yorkie from developing mats and tangles on his coat, you will need to brush him regularly using the best brush for your dog.

If you are trying to get the brush for your Yorkie, then we have your back because we have reviewed the 3 best products for you. 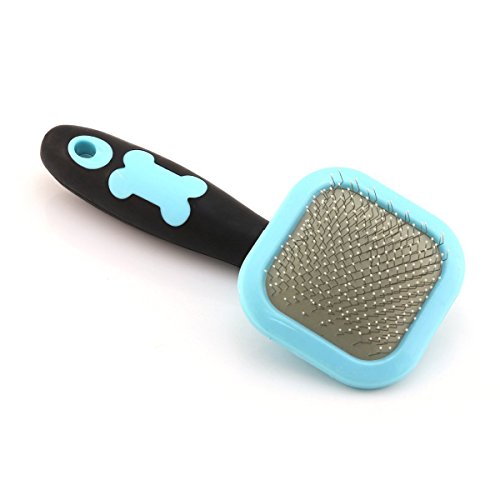 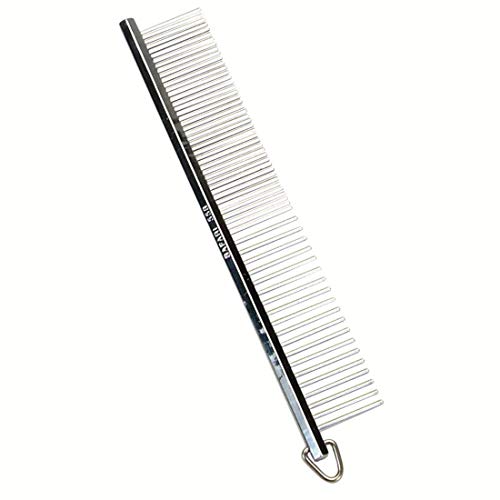 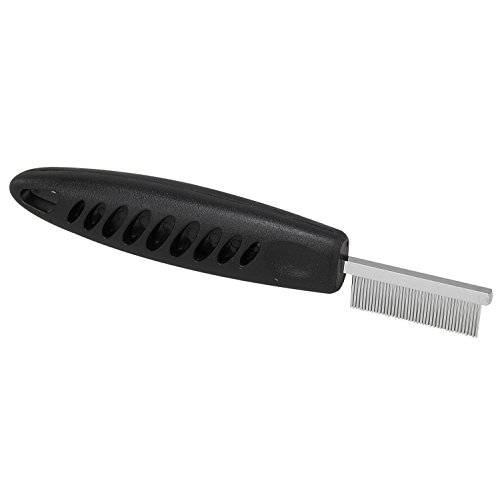 This slicker brush is the best brush for your Yorkie. It is designed to remove loose undercoat and eliminate tangles and knots gently. Petpawjoy slicker brush is also a great grooming tool for Yorkshire terriers since it is able to penetrate deeper into your dog’s coat and remove dander and trapped dirt.

What sets this dog brush apart from the other several dog grooming tools is that it is a rotatable dog brush. You can turn the brush pins in “^” shape and use this brush for grooming or turn the brush in “V” and use it for massaging your pooch.

It’s important to massage your dog as this will help to improve blood circulation on the skin and prevent skin diseases. When using this brush, you won’t have to worry about causing injuries to your dog’s coat. This is because this Petpawjoy slicker brush is safe and effective.

The bristles of the brush are decorated with rounded white tips to protect your dog’s skin from being stabbed by the bristles.

Using a grooming comb alongside a slicker brush is the best grooming practice that your dog could ever wish for. This is because a comb can reach the deepest areas of your Yorkshire’s coat where the slicker brush cannot reach. The best comb you can use for grooming your Yorkie is the Safari grooming comb.

This grooming comb has a lot of desirable features that make it the best comb to use on your Yorkie. It has smooth rounded teeth so that you can brush your dog without injuring his skin. Its size is also perfect for small dogs like Yorkshire terriers.

With a long haired dog such as a Yorkshire terrier, you can’t groom him the way you want with only a brush. You need to have a comb and use it together with the brush. Combs are useful grooming tools for dogs since they are able to penetrate deeper into your dog’s thick fur to brush the hair close to the skin.

Grooming combs are also a must-have for you since there are some tangles and knots that only combs can break.

Master grooming tool face comb is the best comb to use on a Yorkshire terrier. It is a top quality comb that is a must have for any groomer, whether you are a professional groomer or just an amateur groomer. It is made of 40 stainless steel pins to break any tangles and rid your dog’s coat of debris.

It has an ergonomically shaped special handle that will give you maximum control and comfort as you brush your dog’s coat. The stainless steel pins will glide through your dog’s coat effortlessly. Its plastic handle has a hole that you can use to hang it around within reach.

A Yorkshire terrier is very adorable to have as a pet. However, taking care of a Yorkie is a true challenge. This is because you have to always take care of his long silky coats in order to keep him in top shape and looking his best. You need the best brush for Yorkie to maintain his beautiful and healthy hair. Without the right tool, you will get overwhelmed with grooming your Yorkie.

Here are the best brush for Yorkie you can buy:

The post The Best Brush for Yorkie for a Fantastic Grooming Session in 2019 appeared first on Hello Cute Pup.

Funny compilation of Maya acting like humans. I’m sure there is at least one habit which you can relate to! Handsome boy in the FaceTime clip is Instagram: …

Guys, look how funny Sam the rabbit steals food from Bailey’s golden retriever! These pets are really best friends, the way they play is just cutenessoverload.

How to potty train and crate train your puppy! I’m glad you guys are enjoying the video! Get MORE dog training tips and examples on instagram!

Info: All tested foods were checked for safety on the American Kennel Club website before. Pear, sweet pepper and sweet potato are rich in vitamins and healthy …